The BusinessNZ Energy Council (BEC) says a cross-sector scenario model it is developing could become a foundation document for the country’s policy makers and industry.

The group has enlisted the help of more than 30 businesses, government agencies, iwi groups, community organisations and universities to help prepare two New Zealand energy scenarios out to 2050. The work is being carried out in conjunction with the World Energy Council and will use the same computer  model to deliver the quantified outcomes that each scenario represents.

BusinessNZ Energy Council Manager John Carnegie says different parts of the industry have developed their own scenarios in the past.

But he says the BEC work now underway will cover the entire energy sphere. It will also draw on a wide cross-section of the community to focus in on the critical energy issues facing the country during the coming 30 years.

The project is aiming to draw out two equally plausible alternative scenarios to help guide policy. The scenarios should then provide the boundaries within a potential `funnel’ of future outcomes. As such the scenarios, and the narratives underpinning them, become tools that governments and business  can use to assess the potential impacts and implications of policy.

“They are not just nice looking stories,” Carnegie says. “They are quantifiable narratives.”

The work is being carried out for BEC by Sapere Research Group. Two workshops will be held in August and September to thrash out the scenarios. The participants will then reconvene in March to review the results of the modelling in order  to validate the final outcomes. The final report is expected mid-year.

In October, the World Energy Council published two alternative scenarios for world energy use. The ‘Jazz’ scenario envisages a more market-led approach, while the `Symphony’ scenario assumes a higher degree of government  involvement in investment decisions, technology choices and a commensurately higher degree of global cooperation on emissions controls.

The WEC scenario work was chaired by BEC chair Rob Whitney, and used the global MARKAL multi-regional optimisation model developed by the Paul Scherrer Institute in Switzerland to calculate the fuel-use, generation mix, system costs and emissions profile that would result from each.

“You won’t only see what is happening in New Zealand, you’ll also see how that sits in the context of the rest of the world,” Sapere director Stephen Batstone says.

Carnegie says the New Zealand study will be a good test of the potential to apply the WEC approach down to a national level, from the global and regional levels that are modelled at the moment.

It should also provide a practical tool for New Zealand, which has a relatively unique generation mix and emissions profile, and which tends to get swamped within the larger regional models WEC provides at the moment.

Carnegie says the breadth of involvement is impressive and the project should result in a robust pair of scenarios that can be revisited every five years or so to ensure their on-going relevance.

The funnel of possible outcomes 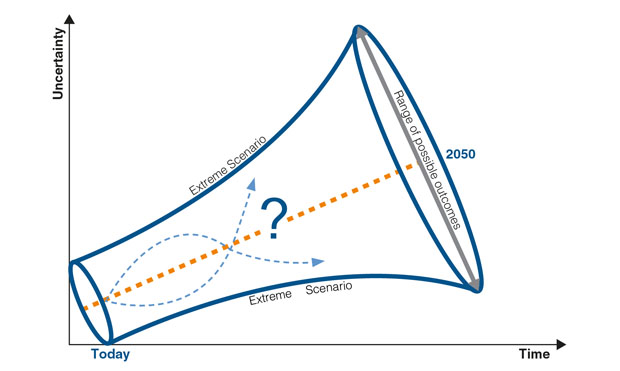