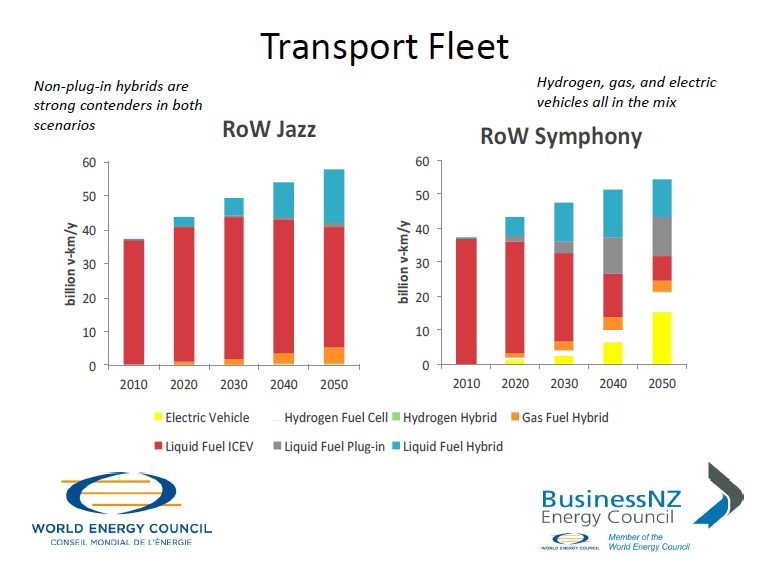 Petrol and diesel vehicles could still account for more than half of New Zealand’s transport by 2050 under a market-based approach to energy efficiency and climate change.

The observation, which comes from the initial modelling run of the BusinessNZ Energy Council’s 2050 Energy Scenarios, also suggests a low penetration of all-electric vehicles but a reasonable take-up of hybrids, including some gas-fuelled hybrids, during the next 35 years.

The BEC is working to develop two plausible scenarios for New Zealand’s future energy use based on whether the world adopts either a more market-based, commercial approach to energy use and climate change, or one in which governments take firmer measures to manage energy security and drive down emissions.

The global alternatives were developed by the World Energy Council and are described as Jazz and Symphony respectively. Jazz assumes higher GDP and population growth, no technology supports and a relatively low carbon price – reaching USD $23-$38 a tonne by 2050. Symphony has lower growth, subsidies  for biofuels and carbon prices reaching USD$75-80 a tonne by 2050.

The outcomes for New Zealand’s transport fleet provide some of the sharpest contrasts between the two scenarios.

Under the rest-of-world Symphony model, New Zealand’s transport growth is slower. But all-electric and plug-in hybrids account for about half all travel in 2050, while hydrogen-fuel cells could power almost as many vehicles as international combustion engines.

The BEC is working with Sapere Research to develop two contrasting scenarios to help business and policymakers understand the factors that will drive the country’s energy use and its make-up in coming decades.

Only about 16 per cent of the fleet is petrol or diesel fuelled by 2050, with smaller shares of gas-hybrid and hydrogen-fuelled cars.

But he says the outcomes from both scenarios will be tested to make sure they are really consistent with the BEC narratives and what the New Zealand economy would produce.

“Would New Zealand realistically develop the infrastructure to support such a diverse set of transport options?”

“Would you realistically have a couple of hundred thousand hybrids on the roads within the next five years? Probably not, so that’s one of the things we’re testing.”

The modelling work is being carried out by the Paul Scherrer Institute in Switzerland. The Markal model PSI uses delivers a global output from which the New Zealand results are extracted.

Batstone says “gentle assumptions” were used for the initial modelling run, but still threw up some interesting results.

In the rest-of-world Symphony scenario, New Zealand’s total energy demand falls at a compound rate of 0.21 per cent annually, led mostly by personal transport and reduced thermal energy use by industry.

In contrast, the Jazz scenario sees energy demand increasing through to about 2040 before levelling off. Demand through to 2050 grows at a compound rate of 0.16 per cent.

Batstone says that surprisingly, residential and commercial demand was about the same in each scenario and continued to rise out to 2050.

That outcome may have been driven by population assumptions, when he had expected there would have been more of an impact from efficiency measures, particularly given the stronger government standards that might be expected under the Symphony scenario.

That is another finding to be revisited.

Overall electricity demand was also the same in both scenarios, rising at a compound rate of 0.9 per cent a year, and reaching just over 200 PJ in 2050. But commercial and residential demand growth is slower in the Symphony scenario and is complemented with increased electricity use in transport.

The make-up of that electricity supply also differs, with coal-fired generation staying in the market longer in the Jazz scenario, which also sees more solar being taken up over time.

Under Symphony, gas-fired generation declines faster and sees wind expand more quickly. Biomass, with carbon capture and storage, appears by 2050, while under Jazz, coal-fired generation returns to the market by then, also with CCS.

Under Jazz, gross energy sector emissions are virtually unchanged in 2050 at just under 35 million tonnes of CO2 annually. Under Symphony they fall to less than 20 million tonnes in 2050 and are almost below 1990 levels by 2040.

Another area of work is the potential impact that a high carbon price would have on New Zealand’s forestry and land and water use.

Earlier in the conference, delegates noted the wide disparity between the take-up of wind previously forecast by institutions like the International Energy Agency and what has transpired.

In an environment of rapid technological change, were forecasts not just as likely to under-estimate the cost decline and take-up of wind, solar and electric vehicles, NZWEA chief executive Pyle asked.

Batstone says the project team did challenge some of PSI’s assumptions about the cost and uptake of new technology.

But he says technology was only one of 19 critical uncertainties the project working groups identified for New Zealand’s energy use, and the goal was to develop two internally consistent alternative scenarios.

The impact of potential `black swan’ events, such as a major gas discovery, or some breakthrough in technology, will be discussed in the final report, he says. The final report will be developed during July.